The classic Simpsons episode “Two Cars in Every Garage and Three Eyes on Every Fish” is about a crooked businessman who self-finances a political campaign based entirely on cheap pandering, solely for his own self-aggrandizement. This is somewhat relevant to the current situation.

The episode’s framing device is Burns’s team of political hucksters and bagmen, who slowly massage his image through a series of hacky political gestures (it’s not clear whether the laser-like focus on impossibly precise poll numbers that spring up immediately in response to each new plot event is itself intended as satire). His ratings slowly but surely climb with each rote cry for lower taxes, until, inevitably, he’s at exactly fifty percent on the night before the election, and everything hinges on dinner with the Simpsons.

The ending is, first of all, amazing. The “card question” Burns’s team gives to Lisa compares his campaign to a “runaway freight train,” which, in context, is supposed to be a positive image, but it’s actually a veiled criticism. It’s a big, dumb hunk of metal, unstoppable, surging inevitably into oblivion. It is under the control of forces larger than humans; no one can stop it.

Homer, for example, supports Burns for no other reason than that he’ll be fired if he doesn’t. That this is illegal is irrelevant; what matters is the bare fact of it. Marge and Lisa want to stop Burns, but there’s nothing they can actually do. The least they want is to not be complicit in evil, but they can’t do that, either. When Burns’s team descends upon the house, what anyone wants becomes a moot point; structure takes over.

This is illustrated by Bart’s and Lisa’s actions at dinner. Bart doesn’t care about the situation either way. He almost screws things up just by instinctively mouthing off, but it doesn’t matter. One quick brush-off from Burns and the scene rolls along as scripted. Lisa, by contrast, understands what’s happening. She wants to screw things up, but she’s desperately aware that she can’t. She sees the cameras, the suits, the eager reporters attuned to Burns’s carefully scripted reactions, and she realizes that anything she could possibly say would just get turned to Burns’s advantage, that she’s no more capable than Bart of having any effect at all. She resigns herself to the inanity of “the card question” out of sheer hopelessness.

Marge seems to be equally powerless. Whe she objects to the dinner, Homer tries to ameliorate her with classic sexist condescension: the big, important world of politics is for men; women should be content to clean up afterwards. Homer, of course, is being genuinely conciliatory; he has zero understanding of the context of his statements. Yet, in his way, he stumbles upon an important truth: the domestic sphere is a real thing, and relegating it to women gives them control over its power. It’s a specific, contingent type of power, obviously, but it’s something, and Marge takes it.

The episode only offers one line of explanation for Marge’s actions: she reassures Lisa by telling her to “always give your mother the benefit of the doubt.” This is not some nuclear-family bromide; what it means is that there’s no such thing as inevitability. Total control is an illusion that the ruling class projects for its own safety, to cover up the holes. As meticulously as Burns’s people prepared every aspect of the evening, they completely missed the most obvious danger. They assumed, without even thinking about it, that the housewife would do her job and prepare a nice, inoffensive meal.

The entire story of this episode is told in one shot that lasts for about 2 frames. When Marge uncovers the main course, everyone in the room freezes in shock. The script has been unwritten, reality has entered the room, and no one has any idea what to do. Lisa smiles. 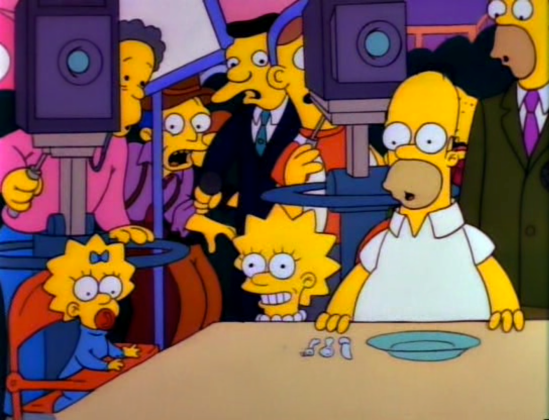 But the actual reason that Burns’s campaign fails is ultimately ambiguous. One of the reporters calls in the headline “Burns Can’t Swallow Own Story,” which has two possible interpretations. One is that Burns is a hypocrite, that the significance of the dinner was that it unmasked him as a phony. His spit-up was a “gaffe” that punctured his polished image. In this sense, despite the outcome, incumbent governor Mary Bailey was wrong to rely on the voters’ “intelligence and good judgment.” Neither of these had anything to do with what happened. Burns lived by the sword and he died by the sword. The truth was never part of the equation.

The other interpretation is that it was actually Burns’s story that mattered, the story being that Blinky was not the canary in the coal mine but merely a harmless aberration. This is the story that Burns advances in his first campaign ad – he unwittingly foreshadows Marge’s coup de grace when he describes Blinky as having “a taste that can’t be beat” (it is, of course, impossible for him to know this, as there’s only one Blinky).

Thus, when Marge concedes that she’ll “express herself” through her housekeeping, she’s not kidding. Her dinner surprise is not a stunt; it’s a specific, relevant political argument. The cause of Burns’s downfall is not at all that he is made to look like a fool or a hypocrite, it’s that his environmental recklessness really is dangerous, and he really would be a bad governor for that reason (speaking of which, 2x relevance combo). From this point of view, the truth outs. All of Burns’s high-priced machinations are entirely successful, but they end up being for naught, because the truth is that which kills you regardless of whether or not anyone believes in it. 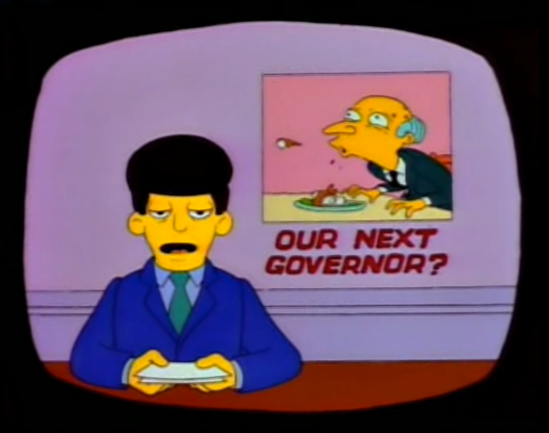 So, the premise of this episode is that American politics is all a big show, an endless procession of photo ops and empty promises with no connection to the question of who’s right for the job. This is certainly the case. One recalls Obama’s 2008 campaign, a towering edifice sure to loom large in the annals of advertising history.

And yet, you can’t build a house on sand. The only reason Obama was able to gain any traction was because people wanted something in the first place, and Obama happened to be poised to exploit that desire. True, much of the antipathy towards Bush II was superficial, based on his sloppy speech and glib demeanor. And much of Obama’s support, even to this day, is based on the fact that he talks good and he seems like a nice guy. But he didn’t pick “hope” and “change” as his slogans for no reason. He picked them because people were actually hopeful, and they actually wanted change.

This time around, things are looking a little different. There’s nobody running a super-slick advertising blitz. On the contrary, the candidates that are getting people excited – on both sides – are the ones who are being completely brazen about their values, and expressing those values through specific, if ridiculous, policy proposals, allowing themselves to look like fools in the process. Furthermore, there have been gaffes-a-plenty from all comers, but pretty much no one cares. Lacking Obama’s elevation of empty rhetoric to an art form, this go-around is illuminating the real values conflict at the heart of the current political situation.

There’s been a lot of talk about “policy specifics” and whether things are “practical,” but none of this actually has anything to do with anything. Consider: The Wall. When people try to argue against The Wall, they’ll point out that you can’t actually build a wall along the whole border, or that it won’t stop immigration anyway, or that immigration doesn’t actually took our jerbs. None of this fucking matters! The Wall is a symbol. It means “keep those brown people the hell out of my country.” It is for this reason alone that immigration is currently a hot-button issue among Republicans. Are there really any mushheads fickle enough to have wondered whether or not deporting all the Mexicans was a good idea, and then changed their minds based on the evidence? I submit that there are no such people. People know which side they’re on, it’s just that they rarely get the chance to express it.

Look, I’m not exactly sanguine about living in a country where half the population holds violent racism among their core values. But given that this is the case, I’d rather know about it. After all, it’s the same situation on the other side. Until just now, everyone thought that any invocation of “socialism” was a death sentence in American politics, that everything had to be argued in terms of efficiency and progress instead of common welfare. As it turns out, this is not the case; it turns out that a lot of people will not only accept such arguments but are thrilled to be able to support a candidate who represents these kinds of values. The truth is strong.

In other words, the idea that we can fix things by getting rid of the spectacle and focusing on the “real issues” is entirely misguided. The real issues are contained within the spectacle, and they’re what people are actually responding to. Bamboozlement is not the problem. This is why there’s nothing more tiresome than the constant condescending cavalcade of “experts” offering “explainers” to help people make “informed” decisions. People are making values-based decisions; offering them facts misses the point.

The whole “disruption” thing is obviously bullshit, but if there was ever an industry that deserved to get the hell disrupted out of it by technology, it’s punditry. The entire job of pundits is to create a fantasy realm where politics is all about strategy and tactics and has nothing to do with actual values. And because those values determine what kind of society we’re going to live in, not to mention who is actually going to get to stay alive in it, pundits are very close to being the worst people in the world. The fact that the internet is allowing people to engage in politics on their own terms is very close to being a real coup.

But the rise of the internet is full of (apparent) paradoxes, and one of them is that the internet is simultaneously stripping away the old veneer of pre-produced talking-head artificiality and creating a new layer of mediation, something different from what we’ve seen before. Twitter, for example, seems spontaneous and authentic, but it’s actually a highly artificial form of communication, the existence of which motivates people to say things they wouldn’t otherwise, in a manner they wouldn’t otherwise adopt. This isn’t about being “real” or “fake”; the situation is not contradictory. Everything is mediated, and every layer of mediation includes aspects that obscure the truth and aspects that reveal it.

Furthermore, the truth is much, much simpler than the professional unexplainers make it out to be. People know what they want, and if you offer it to them, they’ll take it. Some people find this scary. I find it to be the only thing that’s actually heartening. 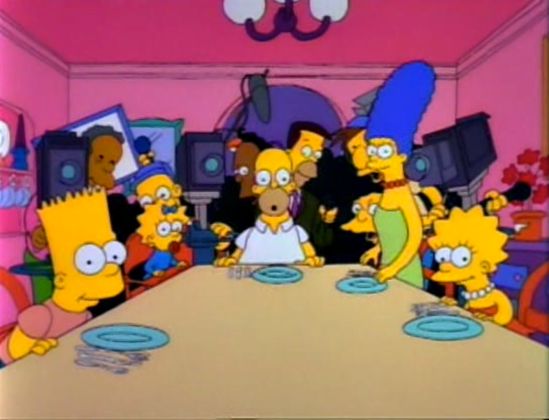