There’s not that much to say about Axiom Verge itself. It’s good. It’s a good Metroid clone. That’s not even a dig or anything; it’s well-designed and it’s fun. And despite the fact that “clone” is the term we use for things like this, there isn’t anything wrong with doing genre work. What’s actually interesting about Axiom Verge, though, isn’t how good of a game it is, but how good of a game it isn’t.

The first thing that happens in the game is that you’re told to go into a room and pick up a gun. You then use the gun to shoot open the door to the next area. In fact, the next three upgrades you get after that are also weapons. The game proceeds pretty much how you would expect from this introduction: most of the gameplay is shooting things, and the boss battles are all firefights.

Actually, the game is disappointing even in this regard. You get a huge number of different weapons (like seriously way too many. Pro tip: the concept of “minimalism” exists for a reason) with different firing patterns and such, but the vast majority of the time the most effective thing to do is to stick with your default weapon and just mash the fire button as fast as you can. The second boss fight is especially anti-notable in this regard: it occurs after you’ve obtained three new weapons since the first boss, and none of them are useful. You know you’ve got a problem when you’re so into shooting ’em up that you’re failing Game Design 101.

This is especially sad when you remember that what makes the Metroid series notable is precisely not the combat, it’s the exploration. Metroid-style combat that consists of merely shooting at enemies until they go away is boring, which is fine, because it’s not supposed to be the focus of the game. Of course, Axiom Verge is far from the only game to make this mistake; indeed, the Metroid series itself suffers deeply from this problem, which is why Super Metroid is still the only game in the series that’s actually worth talking about. In all this time, not a single game has actually improved upon the aspects of Super Metroid that made it great; few have even competently imitated them. 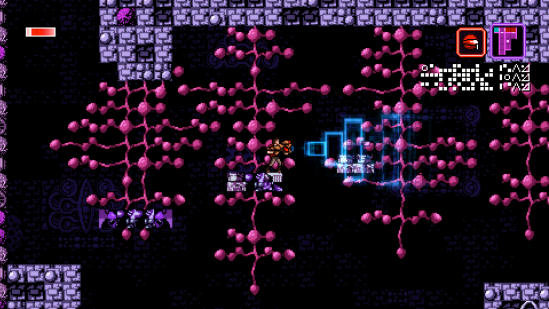 And yet, there are two items in Axiom Verge that actually hint at a path forward: the Address Disruptor, which allows you to “hack” certain enemies and objects in order to change their properties, and the Passcode Tool, which allows you to change the basic parameters of the game by discovering and entering certain passwords, which can then be turned on or off at will. Pretty interesting stuff, right? Here’s a fun idea: imagine that, instead of getting a gun first so that you can start shooting things as soon as possible, the first thing you picked up was the Address Disruptor, and instead of merely pointing it at the door and pressing “fire,” you actually had to use it to rearrange the environment in some way to be able to proceed. And then you got the Passcode Tool, and a password that, like, inverted gravity or something, and then you had an entirely different version of the game world to explore. Then imagine an entire game that followed from this introduction.

Go on, give yourself a minute to really think of some neat applications of these ideas. I’ll wait.

Did you enjoy that? I hope so, because none of the stuff you were imagining is actually in Axiom Verge.

The Address Disruptor does a couple of neat things. It does not do anything neat with the actual environment, whereupon its only use is to allow traversal though certain passages by revealing platforms or removing walls, exactly as if it were a blue key that opens blue doors. Hacking enemies, though, does provide a few interesting moments. Some turn into platforms, others gain the ability to break through certain walls. There’s even one that directly drops an upgrade when killed in its hacked form. Behaviors like these provide innovative new ways to explore the environment and search for secrets.

Ultimately, though, most of the Disruptor’s effects are combat-based. Fast-moving enemies slow down, enemies that normally chase and latch onto you will instead stay still and shoot at you, armored enemies become vulnerable to standard weaponry. Again, the problem with this is that combat is boring; since your goal is to just get rid of the enemies, their behaviors don’t really matter. You’re merely removing obstacles that are in your path. If hacking them makes them easier to deal with, fine; if it’s easier to just shoot them, that’s fine too.

At least that’s something, though. The Passcode Tool is apparently made out of some sort of alien technology that’s powered entirely by disappointment. There are exactly two types of passwords that you can find in the game: one translates some of the log entries you find, allowing you to read thought-provoking fragments that reveal intriguing details about the game’s complex backstory (sometimes I really wonder why I’m doing this to myself), and the other opens passageways in certain rooms, exactly as if it were a blue key that opens blue doors.

There’s one last point that needs to be made about the aesthetics of these items. They’re both presented as ways for you to “break the game,” and their graphical representations support this. Hacking enemies with the Address Disruptor causes them to appear “glitched,” and the Passcode Tool is basically a Game Genie (remember Game Genie? It’s back, in pog form). Even the game’s own ad copy claims that you can “break the game itself by using glitches to corrupt foes and solve puzzles in the environment.” Of course, this is exactly wrong: because these mechanics have specific, intentional effects and the game is designed around them, they precisely do not “break” the game. This may just seem like a cute reference, but what’s important is that it allows Axiom Verge to pretend to be doing more than it actually is; to make do with cuteness instead of trying for depth. This is the problem of mere cleverness. 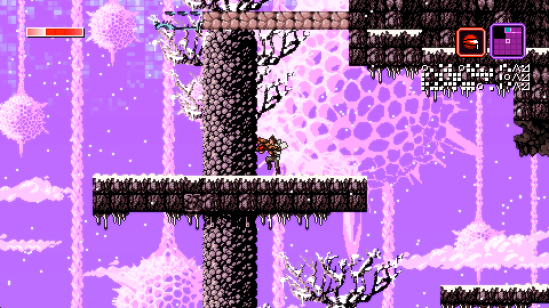 So, since I already used the “kill yr idols” conclusion, let’s try something else. Axiom Verge is science-themed. The player character is a theoretical physicist (uh, I think. He works in a “laser lab,” anyway), and your equipment’s ability to alter reality is implied to come from the development and application of a “Theory of Everything.” What I’m going to suggest is that Axiom Verge ought to have followed its theme.

As mentioned, the game is a more combat-focused version of the basic Metroid design, “combat” in this case meaning that there are “enemies” whose only purpose is to be obstacles to your progress, and you get them out of the way by “attacking” them enough to get rid of them while avoiding their own attacks on you. This is very much not what science is like. Science (when done well), is about open-mindedness, collaboration, experimentation, careful observation, and even tedious rigor. Of course, I’m not claiming that the game should have tried to implement a complete representation of the scientific method, but I am claiming that it could easily have done better than implementing the exact opposite.

And here’s what’s interesting: the basic explorative gameplay of Metroid is actually already fairly science-like. You have to stay open-minded and look for alternative routes in order to successfully navigate the environment. You have to experiment to understand how your tools interact with the game world. You have to make careful observations to find likely locations of hidden areas. Sometimes you even have to tediously check every possible wall for a hidden passage. Axiom Verge, with its claimed ability to allow you to alter the environment via the Address Disruptor and change the basic nature of the game with the Passcode Tool, should have been able to do even better than this; it should have been a step forward. Instead, it does the easy thing and slaps a bunch more guns onto a basic design template. It retreats from the game it ought to have been.

The third boss fight provides some insight into how things could have worked. The boss is a giant, screen-filling monstrosity that throws multiple simultaneous attacks at you, and if you try to fight it via the standard dodging-and-shooting approach, you’re totally doomed. Instead, you have to use the Address Disruptor to reveal more platforms in the area that both block some of the boss’s attacks and provide you with more advantageous positions from which to attack (it’s over once you have the high ground). This is a great example of how a boss fight can rely on thought and planning rather than reflexes and button mashing. And it shows that, even with just the tools that Axiom Verge already has, there could have been an entire game that worked this way.

This is the real significance of the fact that Axiom Verge is a Metroid clone. Starting from the basic Metroid design and then adding enough “innovative” ideas to make the game “original” is exactly the wrong approach. The clearest example of this mistake is the Remote Drone, which is used to move through narrow passages in exactly the same way as Metroid’s Morph Ball. Its look and feel are slightly different, which guarantees that clueless reviewers will praise it for “originality,” but the actual function of the item is exactly the same. Certainly, when one considers the possible applications of a remote-controlled robot in the context of scientific exploration, one can easily imagine several more interesting alternatives.

The better approach, then, is to start with a theme, something that you actually want the game to convey, and then use whatever aspects of existing designs are useful for doing so. Even if this results in a pure genre game, it’ll be one that matters for its own sake, that isn’t merely a representative of its category. This is part of the deep problem that video games have with insularity: they’re only judged against themselves. A different version of a game that’s already been judged “good” is therefore necessarily also “good.” But this doesn’t give anyone who doesn’t already like this type of game any reason to care about it; indeed, it doesn’t give the game a right to exist when someone else has already done it better. The reason nobody has to make any excuses when some new band comes out sounding like the Ramones is because it’s taken for granted that music is a way to express something; we expect it to stand up to judgment on our own terms. This is not currently the case for video games.